Home›Blog›Want to race? Here's how

Last time, Alpine sales assistant Rachel shared her inspiring story about how she rediscovered her love of exercise through cycling. Now, she tells us how she got into racing… useful tips for any budding cyclist!

Are you like me? In 2015, my free moments were consumed with cycling. Any opportunity I had, I was out on the bike. Sometimes I would cycle for hours and hours on end, barely thinking about anything and simply enjoying the scenery and wildlife. With the amount of miles I was putting in and the enjoyment I took from the sport, I was encouraged to join a club. I was nervous about the idea: worried that I wouldn’t be able to keep up, that I wasn’t fit enough, that a club was just too daunting. However, after a LOT of persuasion from a now good friend Luis, I decided to go along.

Dundee Thistle are one of the main local clubs and they hold a number of club runs and events. I quickly got involved. They taught me how to group ride, how to respect other riders and how to read their movements. It was a massive learning curve.

One of my favourite nights was Wednesday track rides. I loved the chase, and christened it ‘cat and mouse’. I had never really contemplated riding around in circles for hours before, but the fast pace and exhilaration that came with it was addictive. I remember my first evening when I met Luis. One of the first things he said to me was ‘you should race’. I quickly disregarded the idea. I had only just started cycling, and I felt that this idea was a bit premature. I wasn’t ready or strong enough to race. However, he planted the seed… 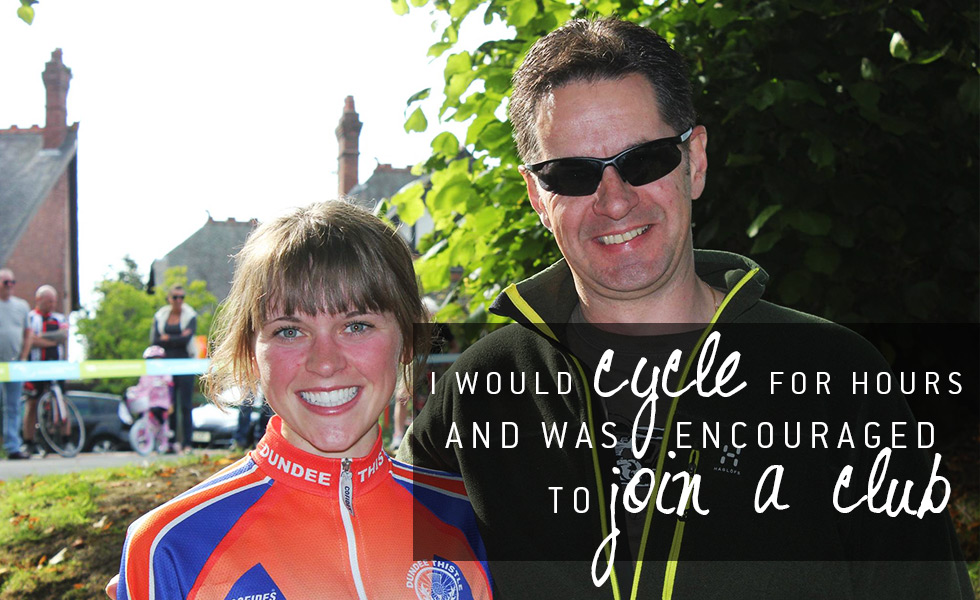 After a couple of months cycling, my auntie and uncle encouraged me to enter a few sportives. The first I entered was the Etape Loch Ness. When we arrived the night before it was snowing lightly, and we all fully expected the next morning to be a write off. Luckily it wasn’t… it was just bitterly cold.

I really had no expectations; I just wanted to cycle somewhere new. As we lined up, my uncle and aunt encouraged me to go ahead and I did. I fired on. The cycle was beautiful, the roads undulating and it was very well organised. I made sure I had enough food and water, so didn’t stop at the feed stations… and the next thing I knew, I was crossing the finish line. Once my family returned, we decided to hang around for the prize giving. It turned out I was the third fastest woman. I was shocked and delighted… and a bit embarrassed standing on the podium. I was next to Lee Craigie, a great talent. This was the moment I started to think that maybe, just maybe, I wanted to return to competitive sport. I knew I had the motivation and the drive, I just didn’t have the confidence. But my self-esteem was slowly increasing as my Dundee Thistle team, family and friends kept encouraging me.

So I started racing… but it was a whole different ball game. It was technical. I had fitness – something that came naturally to me as an endurance athlete – but I lacked power, strength and the handling skills that many riders had developed in childhood. In my first race I came ninth, which wasn’t bad. But I struggled with the sprint finish, where many of the girls were physically much stronger with more body mass, experience and training under their belt. However, I was chuffed. It was good to be back. The determined and competitive side within me was returning and I couldn’t control it. I did another race and came sixth. Now, I believed this was something I wanted to pursue. 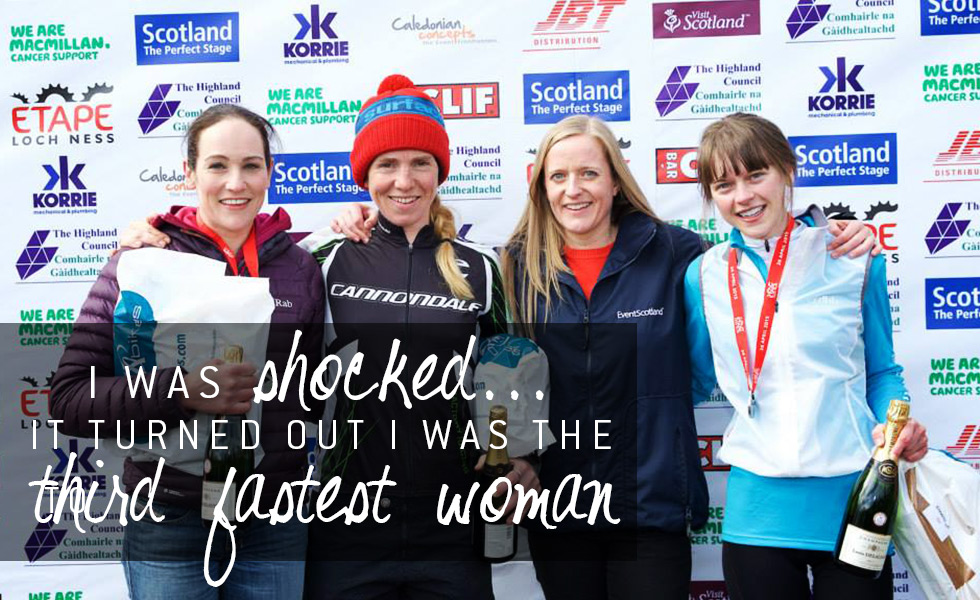 Don't let the falls get you down

However, in my second sportive – the Etape Caledonia – the conditions were terrible, the rain torrential and I had a horrible feeling before I started. And I was right, too. About 10 miles into the race, I was coming around a corner descent when I saw someone pull out in front of me. I panicked. Pulling on the brakes a little too heavily, the next thing I knew I was on the ground, drifting in and out of consciousness. The pain was unbearable.

It was a pretty low point of the year, sitting in the back of an ambulance in paper pants. I’d ripped my lycra so badly and I wasn’t sure where I was or what I was doing. I got a real glimpse of what it must feel like to lose your memory. It was terrifying: I couldn’t remember anything and the harder I tried, the worse it was. As it turned out, I had managed to knock my pelvis out of alignment, hence the pain. In the end, I went to a physio who gave me some exercises to do and told me I wouldn’t be back on the bike for at least 6 weeks. Being the stubborn soul I am, I jumped on my bike 3 days after the accident and cycled 10 miles. The pain was excruciating. It was then I realised that I had to be a little more patient. In the two weeks that followed I did my exercises religiously, went swimming and walked at least 2 miles every day. Within three weeks, I was cycling again. Never give up, never give up. It’s like a mantra replaying itself in my head. Giving up is too easy and goes against my nature.

Despite getting back on the bike, I was no longer confident descending. Any stone that made my front wheel twitch got me feeling scared. The memory of hurting myself was still vivid. I felt disheartened: I was missing a huge chunk of the racing season, many women would be fitter than me as I couldn’t train, and this made me apprehensive about racing again. But then my uncle got in touch from Germany.

He had a different opportunity, a challenge. He told me there was a sportive in Germany called the Schwarzwald Super Cycling Marathon… 150 miles and 27,000 feet climbing. I was sceptical at first, but the more I thought about it, the more I realised I had nothing to lose. The months that followed were spent training vigorously: long base miles, intense stamina and strength-building sessions, plus core workouts to increase my upper body strength and hold posture over long mileage. Most months, my overall mileage was around the 1000 mile mark. There were weeks when I was tired, I felt like I was getting nowhere and the challenge seemed impossible. I started worrying, fearing that I wouldn’t be able to complete the race. In the days that preceded the cycle I had sleepless nights, felt panicky and honestly questioned my own sanity. But I was determined. Determined to push my own boundaries, to prove myself, just to try.

Germany was a turning point for me. I finished the sportive, conquered my fears and loved every minute of it. To my surprise, I was the first woman to complete the route in a time of 10 hours and 30 minutes. At this stage I began to think that there could be a future in the sport for me.

After Germany, things changed. I returned to racing and my results got better. There weren’t many races left after missing most of the season, but I had strong results in the ones I competed in. I had done no formal training, simply riding my bike when I fancied and on whatever terrain I fancied. I didn’t train for any intensity but I loved the hills. I would plan the hilliest route I could find and rep it until my legs couldn’t take any more. It was nice to be able to push my body physically without the worry I used to have. 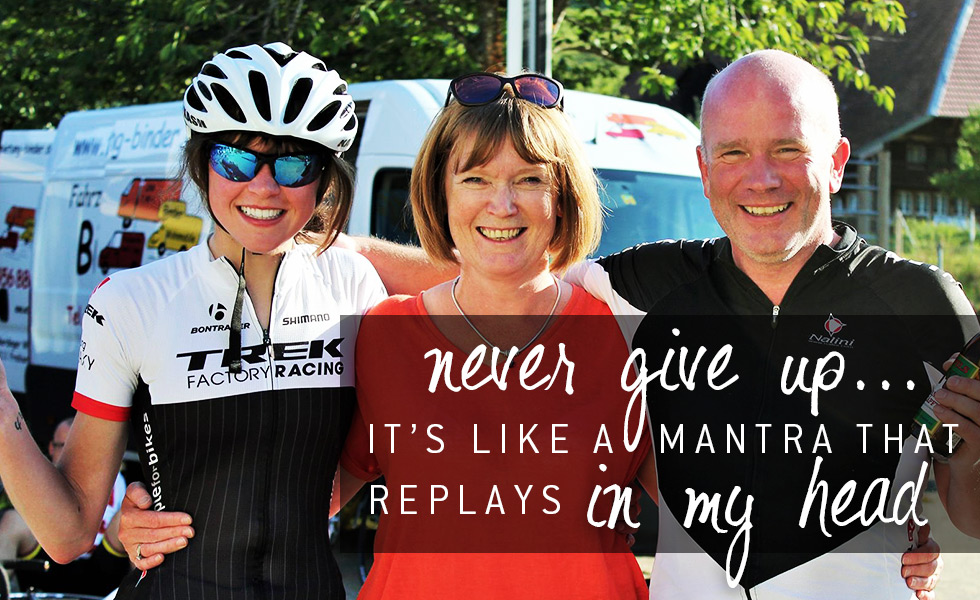 The more I cycled, the more people I met within cycling, the majority of which now comprise some of my best friends. There was now a burning desire within me to pursue the cycling on a competitive level. I’d never felt so passionately about anything before.

I was lucky enough to meet Claire, who cycled for Team 22. She spoke to her coach about me and we got in contact. I told him about my season, what I wanted to achieve and he offered me a spot on the team. I was absolutely ecstatic. I couldn’t believe that somebody was willing to take a risk with me! Now I have a team, an opportunity and a dream.

Get inspired: set yourself and challenge

Looking ahead to this year, I think there is a lot of exciting things in store. I am a great believer in being proactive, and think there’s no time like the present to do what you want. This year I’ve set no goals, and plan to have no expectations. Why?

Well, this year is going to be a huge learning curve for me, both physically and mentally. Physically, I’ll be pushed to my limits: long, hard training weeks; plus intense weekends racing and travelling. The pelotons in England will be much bigger and the opportunity to do well decreased. There will be a higher chance of crashes, injury and fatigue. Mentally, staying positive and motivated can be difficult when you’re tired or not getting the results you want.

But I’m looking forward to the challenge. That’s what makes life interesting. My plan is just to enjoy the ride, to learn from others who are more experienced, to become a stronger cyclist, to train hard and most of all? Make use of every opportunity that comes my way. It’s going to be a tough year, but I’ll embrace the challenge with open arms.

So if you’re sitting reading this, wondering what you might do to make your 2016 different, give cycling a bash. It changed my life and might change yours. 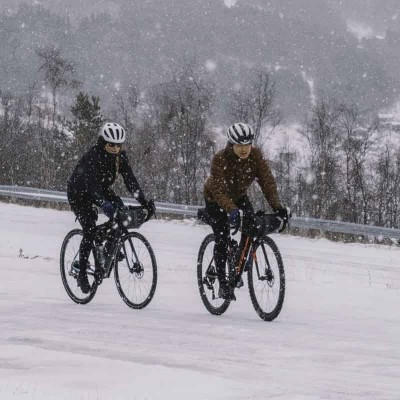 Two-wheeled fun needn’t be limited to the summer months. Here are some tips to get the most out of your winter riding and some gear recommendations too. Read more01-02-23 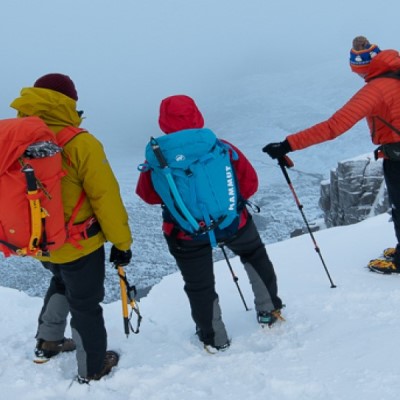